Changxing, China — Team Novo Nordisk took a 12th place for the second day in a row at the 2019 edition of Tour of Taihu Lake with Andrea Peron sprinting amongst the best of the field in Changxing.

Stage 3 took the peloton from Huzhou to Changxing over 117 km of a mostly flat course that included two intermediate sprints. The attacks came flying from the gun but were systematically closed down. Several teams, including Team Novo Nordisk, were very active during the first 70 km but no real breakaway was formed.

Eventually when there were just 38 km left to go three riders managed to break clear and gain a slight gap on the peloton.

Team Novo Nordisk made a strong showing of perfect teamwork and moved to the front soon after setting a lively tempo at the head of the affairs.

As the peloton passed under the flame rouge Peron was in a good position but the 30-year-old Italian launched his sprint a fraction too early and had to settle for 12th place on the line. Race leader Dylan Kennett (St George Continental Cycling Team) took a hard fought win and keeps the lead in the overall classification.

This Sunday another fast and flat stage awaits the riders in Tour of Taihu Lake as they’ll tackle 10 laps of a city circuit in WuJiang that will total 116 km.

“Fast stage again today with many attacks in the first hour. A small break of three stayed away for 30 km or so but it was another bunch sprint. My teammates did an amazing job today. I started the sprint early so I didn’t repeat the same mistake as yesterday. Sadly the stage was 70 meters too long to get a great result.” 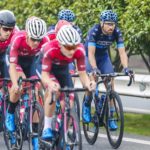 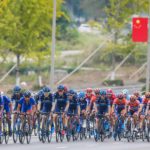