Jurong, China— Andrea Peron took a solid 8th place in Stage 5 of Tour of Taihu Lake after teammate Sam Brand put in a strong performance for Team Novo Nordisk in the breakaway.

The 5th and penultimate stage of Tour of Taihu Lake offered up three climbs and the promise of a shake up of the general classification.

Sam Brand did well to successfully fight to get himself in the breakaway and represent the Changing Diabetes jersey up front during most of the day.

The 28-year-old Isle of Man native broke clear of the pack in the early stages and together with five other riders. The sextet composed of Brand, Nicola Venchiarutti (Cycling Team Friuli), Junyong Wang (Hengxiang Cycling Team), Tegele Yi (Kunbao Sport Continental Cycling Team), Dzianis Mazur (Minsk Cycling Club) and Wenbo Huang (Shenzhen Xidesheng Cycling Team) opened a gap up to the four minute mark and stayed away until the first of the three final climbs.

The climbers amongst the peloton had their eyes set on making it a hard race to shake off the sprinters, including the GC leader, so several attacks flew off the front as the gradient began to rise.

The escapees were reeled in with 44 km to go but Sam Brand showed great form to stay within the main field and shift his focus to support teammate Andrea Peron for the finale.

The stage was once again decided in a sprint, this time from a select lead group, with Brenton Jones (Delko Marseille) taking the win. Peron took 8th on the line, an improvement from the previous days and the team’s second top 10 result in this edition of Tour of Taihu Lake.

Dylan Kennett (St George) was dropped several times during the climbs but was able to rejoin the peloton and contest the final sprint, notching a 4th place thereby keeping the leader’s jersey with one day left to go.

This Tuesday the world’s first all-diabetes professional cycling team concludes its Chinese campaign with the 6th and last stage of Tour of Taihu Lake: a short, flat 73.6 km course in Jinhu.

“I knew, based on last year, that today’s stage would probably define the general classification. Today started with a lot of wind but I had good legs so despite the headwind at the start I followed an early move and then looked back and saw we had a gap. The fight to get in the breakaway wasn’t fierce but once there I had to work hard. We ended up opening a gap of around 4 minutes but because it was a tough finish I tried to manage my strength and hold something back. We were caught with around 44 km to go but I was able to stay with the main group. I fought hard to stay upfront to help Andrea (Peron) for the final. Me, Charles (Planet) and David (Lozano) worked to position Andrea for the select sprint and he managed to finish 8th. I think he wanted more but it’s a good top 10 and a strong finish to a tough stage.” 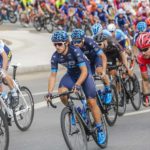 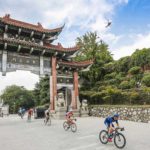