Thursday’s stage began in Sharjah and proved to be another battle between Team Novo Nordisk and Gazprom – RusVelo for the intermediate sprint jersey.

The peloton kept the five-man on at a manageable gap all day, never allowing more than four minutes.

The break was reeled in with 30 km remaining in anticipation of the bunch sprint along the waterfront in Khor Fakkan. Team Novo Nordisk riders found each other and worked well into the final kilometers. In the finish, Benhamouda sprinted to 13th position.

Team Novo Nordisk, the world’s first all-diabetes pro cycling team, continues racing at the UAE Tour on Friday. The penultimate stage most likely will determine the overall race. The 180-km stage features a flat approach leading to the final 20 km to the finish line. Another squad is currently racing at the Tour du Rwanda.

“It was definitely windier and the bunch kept us on a tighter leash, which means we used more energy and rode harder today. I definitely enjoyed my share of strawberry Honey Stinger waffles to get through the day. Overall, my priority was keeping an eye on the RusVelo riders because we were outnumbered and putting Charles into the best positions for the sprints.” 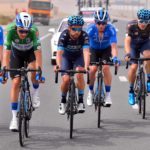 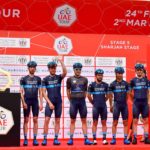