Planet Fights Again in Break on Stage 4 of UAE Tour

Hatta Dam, UAE —Team Novo Nordisk’s Charles Planet featured in the breakaway for the third straight day at the UAE Tour. After taking 13 intermediate sprint points, he remains second in the Abu Dhabi Aviation intermediate sprint jersey classification and will wear the jersey again on Stage 5.

Wednesday’s stage was the longest of the seven-day race and considered by many as one of the more difficult stages of the UAE Tour. The 197-kilometer stage had riders end with a final 500-meter kicker featuring gradients of 17 percent.

Will Clarke (Trek-Segafredo) and Alessandro De Marchi (CCC) attacked from the start and Gazprom – Rusvelo riders Igor Boev and Artem Nych joined them. Planet quickly jumped knowing his jersey was in jeopardy, and the current leader in the sprint and intermediate sprint classifications Stepan Kuriyanov (Gazprom – RusVelo) hitched on to his wheel.

The six-man group earned a maximum gap of more than four minutes. Planet was second to Kuriyanov through the first intermediate sprint but took top honors through the second sprint.

As the race headed across the open desert, the winds kicked up and sandblasted the peloton causing it to splinter. With 14-km remaining, Planet’s breakaway group fell apart and the Frenchman was soon swept up by the peloton.

In the approach to Hatta Dam, Team Novo Nordisk’s newest signee Peter Kusztor was in solid position in the front group hitting the base of the final climb. The Hungarian finished five seconds behind stage winner Caleb Ewan (Lotto-Soudal).

“It was a crazy, crazy day with lots of wind. I was against three guys from the same team so they were playing against me and it was really hard. I was quite happy that I was still able to win one of the sprints. Maybe I will win this jersey, maybe not, but I really like fighting for it every day.” 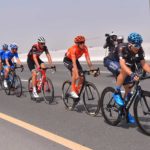 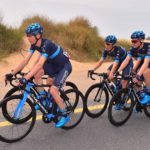 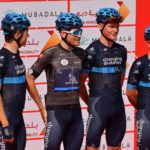