Calabria featured in a six-man breakaway that escaped moments after the neutral start on the 153-kilometer race that began on Al Maryah Island in Abu Dhabi. The 29-year-old Australian was runner-up through the first intermediate sprint and took third in the second intermediate sprint, which earned him enough bonus seconds to move into the top 10 overall. In the final 10 kilometers, the breakaway splintered and the race came down to a bunch sprint with Marcel Kittel (Quick Step Floors) taking the win.

“Charles went in the first move and after that was caught, another attack went. I was a little far back but it was the right combination and I jumped in it,” Calabria said. “In a race like this, there isn’t much that separates everyone, especially on Stage 2. It was fun being at the front of the race and part of the race. I’ve had a good winter and it was nice to see all the hard work is paying off.”

Team Novo Nordisk, the world’s first all diabetes pro cycling team, continues racing at the Abu Dhabi Tour on Saturday with the race’s only mountain stage. The 186-kilometer stage begins at the Hazza bin Zayed Stadium in Al Ain and ends with an 11-kilometer climb up to Jebel Hafeet with gradients of 11 percent. 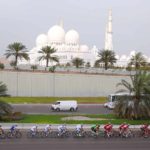