Mestre, Italy — Team Novo Nordisk put up a fighting performance in Thursday’s first stage of Adriatica Ionica Race, with local talent Umberto Poli riding strongly in the breakaway for over 100km. Six sterrato sections in the second half of the stage provided exhilarating backdrop to some explosive racing, a challenge that our Changing Diabetes squad overcame with flying colours.

Scorching sun and hot temperatures set the tone for the mercurial bike racing that took place over the 189 km stage which started in Venezia and headed north to finish in the scenic seaside location of Grado. The world’s first all-diabetes pro cycling team was eager to show the GSG jersey at the front of the race and Umberto Poli took the initiative early on with a powerful attack, breaking clear of the peloton. The 22-year-old Italian was joined by other four riders and together they carved a sizable gap of over five minutes after 30km.

The main field kept the advantage of the quintet in check and by the time Poli and his breakaway companions entered the first of six gravel sections – or sterrato as the Italians designate them – the gap was down to just two minutes. The grueling surface took a toll on the escapees and after a crash that took down Guy Niv (Israeli Cycling Academy) Poli was unable to keep the wheels and was reeled back in by the charging peloton.

David Lozano, Andrea Peron, Charles Planet and Peter Kusztor kept their position in the main group and stayed on the right side of the splits after the sterrato claimed casualties in an alarming rate.

The decisive selection happened in the penultimate gravel sector, with 33 km to go, with all but 22 riders forging ahead.

In the end, Deceuninck – Quickstep, dominated the proceedings and took a clean sweep of the podium with Alvaro Hodeg winning the stage ahead of teammates Florian Sénéchal and Philippe Gilbert.

Team Novo Nordisk put in a great collective effort to then set up Andrea Peron for the finale in the first chase group and the fast Italian delivered, winning the sprint which guaranteed him a 23rd position on the day.

This Friday the second edition of Adriatica Ionica Race heads into mountainous terrain and the peloton will face the Queen Stage, a 204 km ordeal with four KOM’s including two Cat-1 climbs and a summit finish in the mythical Tre Cime Lavaredo.

“Today I was able to go on the breakaway. Initially I went with just one other rider in the first kilometers but afterwards we were joined by three others. We worked well together all day but as we entered the first gravel road one of guys crashed and I dropped a little bit so the peloton caught me just after this first gravel section. I then stayed together with my teammates in the main group for the second sterrato. Unfortunately I suffered a lot with the heat today. It was nearly 40 degrees (celsius) which is way too hot for me. Still I’m very happy with my performance. This is an important race for me because it’s in my region (Veneto area) and I really enjoyed my day out there. I had good legs and did a good job for the team.” 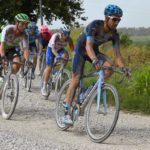 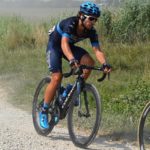