Team Novo Nordisk made their official debut in Adriatica Ionica Race in an electric twilight criterium in Mestre, on the outskirts of Venice. Frenchman Charles Planet showcased the Changing Diabetes jersey at the front of the race and survived the multiple splits to finish in the main bunch.

The second edition of the Italian stage race Adriatica Ionica Race kicked off this Wednesday with a criterium style opener consisting of 30 laps of a 2.7km urban circuit in Mestre for a total of 81.5km. With no times being taken at the finish line only the stage honours and first sprint jersey were up for grabs which meant half way through the race multiple riders from several teams called it a day and pulled out so they wouldn’t be lapped.

Initially many riders tried to break clear but all the moves were swiftly reeled in by the Deceunick – Quickstep led peloton. The tempo was lively from the start but with 15 km to go the main field began to split with the turn of speed dictated by the sprinters teams. Italian Andrea Peron, who was racing a stone’s throw away from his home town, and Charles Planet did well to stay in contention at the front of the race, the latter finishing just a few minutes after the day’s victory Phil Bauhaus (Bahrain-Merida) who out-sprinted Alvaro Hodeg (Deceuninck Quick-step) in a selective sprint.

The world’s first all-diabetes professional cycling team continues to race in Northern Italy this Thursday in the 189 km stage 2 that starts in Venezia – Favaro Veneto and finishes in Grado. The route includes over 50 km of sterrato, or dirt sectors, in the last part of the stage and will certainly provide the backdrop for some exciting racing.

“It was a pretty technical circuit and with a 135 riders it was a rather big bunch for this kind of circuit. The first half of the race was a pretty fast but the tempo was quite okay. 15 kilometers to go (Deceunick) Quick-step started to pull really hard and the race split up into a single line all the time. I tried to do my best and get some confidence for the next days because in the end there were actually not many riders left in the group and I was still there, so overall not a bad day for my first race back to competition in this second part of the season.” 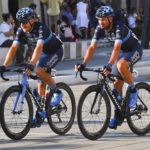 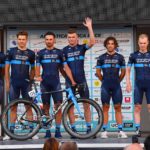