Lozano Leaps Into the Storm at Arctic Race of Norway

FINNVIKDALEN, NORWAY – David Lozano expected sunshine at the start on Saturday’s third stage of the Arctic Tour of Norway, but instead settled for heavy rain and wind in the first hour before dry roads and bright skies greeted him at the finish.

Lozano and the rest of the peloton awoke to mixed weather forecasts for the Lyngen Alps, a tiny seaside community separated by a spectacular ferry ride from the team hotel in nearby Tromso. When the riders set out in front of the enthusiastic crowd to skirt the giant mountains that climb out of the sea, dark and rolling clouds followed and then overtook the race, pelting everyone with thick, fat drops of rain and heavy crosswinds.

Undaunted, the peloton remained in pursuit of a six-rider breakaway, following the coastline through deep green forests of birch and pine, descending into a tunnel under the sea and emerging to the surface to join on the finishing climb to Finnvikdalen. Lozano and his teammates held on as the leaders attacked in the final five kilometers, with Norwegian rider August Jensen holding off Belgium’s Dylan Teuns and Dorian Godon of France to take the uphill win.

“The start was hectic, because they predicted rain but we were looking at the sky and it was pretty sunny. After 2km a black cloud came in and it was rain and a lot of thunderstorms. With the wind it was a little bit hard for the first hour and a half.”

“BMC and Katusha again controlled the race, and the rain storm made everyone a bit crazy on the road, going for jackets and wet weather gear. The breakaway today was for the King of the Mountain jersey, and we sent David and Javi up for the finish. The climb was very fast, really a sprint, and with a tailwind it was a rapid ascent up the climb.” 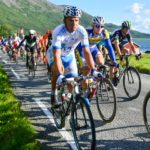 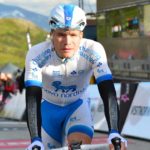