Mistakes, disappointments and bitter experiences all have something in common: you can learn from them.

Recently, I went to Hyderabad, India where I did several visits at hospitals to meet children with diabetes. The goal was pretty simple—have a pleasant day where I would interact with the kids, play a bit, give a fun speech to inspire them and put a smile on their faces.

After a tortuous drive through what felt like an endless city, we arrived at the first hospital and it felt like the world suddenly collapsed. This is what awaited us: mud, trash, broken ground, an unknown disinfectant white powder in the corners. People were packed together with everything from broken legs to using rotten wheelchairs along a long emergency unit’s hallway. Lifeless gazes, that smell, that sort of silence. I was absolutely shocked.

Up to the second floor with plastic surgery to the left and endocrinology to the right. The deplorable state contrasted with the warming welcoming staff at the hospital. They were the best example of how to overcome a situation and get the job done.

I confess it was tough. I got there with the idea of making those children smile, but I went blank and hesitated if I could keep going. I was lucky to have a few minutes to think, and I remembered why we were there: to inspire, educate and empower those children so they could know how valuable they are and how many possibilities they have ahead.

Society in India and many other countries have stigmatized diabetes to the point where people living with it get excluded and mistreated.

Can you imagine how hard it is for children to be diagnosed with a chronic disease? Add on top of that having difficulties around access to treatment? And then the worse part: being blamed of their diagnosis and being told they are useless. It’s terrible.

The kids in each venue were sitting silently, shy, and not knowing what to expect from my talk. They looked hopeless. I knew I needed to be serious, forceful, and straightforward. They needed the most efficient form of inspiration.

At the end of the talk, we saw the results that we hoped to see: smiles, questions, conversations, tears, emotions, joy, children telling their dreams. Everything felt so worth it, and yes, many of those tears were mine.

I’ll remember them forever, like the little girl who asked me: “Sir, can I dance if I have diabetes?”

She loved it, but she wasn’t allowed to dance anymore.

I replied, “Of course you can! Dance every day, just take care of your diabetes.”

She smiled and ran away already dancing! How simple is to make a child happy?

I also remember the young adult who told us how he put up with taunts and limitations during his childhood, but he ended up fulfilling his dream of becoming a software developer. Now he feels empowered to help younger ones to pursue their dreams.

There were hundreds of these stories. Children who dreamed of becoming scientists, doctors, lawyers, gymnasts, cricket players, so much talent! And I believe they will go a long way. They don’t deserve to think they are a nuisance to society. They are the future and I believe they are capable of being the ones who can defeat the stigma.

The situation over there was and remains tough. But I’m happy that together with doctors, parents, friends and family that this community can become stronger and empowered. They know they can dream big and will drive the change of diabetes in their society and around the world.

From my end along with the rest of Team Novo Nordisk, we’ll continue to fight injustices and work every day to create a better world for people with diabetes.

Finally, I wanted to highlight the amazing job that Novo Nordisk’s Changing Diabetes in Children program is doing in many countries and for the opportunity they gave me, as well as to all those who fight every day and are changing diabetes. Together, we are unstoppable!

If you want to keep up with Brais as he continues to travel the world as a Team Novo Nordisk ambassador, follow him on his social media accounts below: 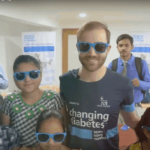