Colorado Springs, Colorado — The opening stage of the four-day Colorado Classic was more dynamic than organizers anticipated with torrential rains and strong thunder and lightning battering the peloton during the 150.4-kilometer stage. Team Novo Nordisk’s Stephen Clancy battled it out in the front group and held on to take 17th place in the wet finish. The result serves as the Irishman’s top result to date at a UCI 2.HC race.

Stage 1 featured six laps around a 25.1-km circuit that ran in the shadow of Pikes Peak and through the iconic Garden of the Gods. The race started and finished in downtown Colorado Springs. A five-man break escaped on the first lap with Jean Bosco Nsengimana (Team Rwanda) eventually bridging up.

The break earned a maximum gap of 4 minutes ,and as the impending severe weather moved over Pikes Peak, the peloton picked up its pace. On the penultimate ride through the Garden of the Gods, heavy rains and strong winds punished the riders.

Before the start of the final lap, all the original escapees were caught and a new 13-man break went off the front. The field quickly reeled them in and Taylor Phinney (Cannondale-Drapac) attacked. He started the final lap with a 30-second gap but was caught with 16 km to go.

Heading into the finish, several riders attempted to get away, but the race came down to a bunch finish with John Murphy (Holowesko-Citadel p/b Hincapie Sportswear) sprinting to the win.

Team Novo Nordisk, the world’s first all-diabetes pro cycling team, is currently competing in two races: the Arctic Race of Norway and the Colorado Classic. Friday’s Stage 2 of the Arctic Race is a 184.5-km race from Sjøvegan to Bardufoss while Stage 2 of the Colorado Classic will be a test of endurance and willpower. The 103-km race includes 10 laps through the scenic mining town of Breckenridge and features more than 2,133 meters of climbing up the leg-crushing Moonstone climb. 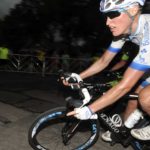