Denver, Colorado — Stage 3 of the Colorado Classic was a 130-kilometer out-and-back run from the RiNo race hub to the mountains west of Denver.

Attacks flew immediately following the neutral zone, but the peloton wasn’t willing to let any riders go because the overall race was still tightly contested. A 13-man break eventually went clear on Coal Creek Canyon Road, but due to its large size, three riders attacked to form a new break.

Eventually, Marco Canola (Nippo-Vini Fantini) bridged up to make it a quartet. As the race reached the first categorized climb, which included a dirt section, four GC threats attacked from the chase and caught the four-man front group.

Heading over the summit, the threatening skies finally opened up and the riders fought through rains until the feed zone. Leading into the second categorized climb, Manuel Senni (BMC Racing Team) and Serghei Tvetcov (Jelly Belly-Maxxis) attacked and built a sizeable gap on the technical descent back towards Denver.

Despite a large chase group, Senni and Tvetcov held on until the finish with the Russian taking the win. Senni moved into the overall race lead.

“It was a pretty hard stage and we don’t have a traditional climber, so our plan was to get through the day as best as we could and look for opportunities on tomorrow’s final stage. It is a circuit race around downtown Denver, so it should be flat and fast. It most likely will come down to a bunch sprint, but you never know what will happen when the flag drops.”

Team Novo Nordisk, the world’s first all-diabetes pro cycling team, is currently competing in two races: the Arctic Race of Norway and the Colorado Classic. Sunday serves as the final stage for both races. Stage 4 of the Arctic Race is a 160.5-km race that starts and finishes in Tromsø while Stage 4 of the Colorado Classic is a 120.1-km circuit race around downtown Denver. The riders will take the 12-km course ten times in what should be a thrilling and intense final day of racing. 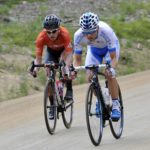