Larciano, Italy- On Sunday, Team Novo Nordisk faced a demanding day in the saddle at Italy’s GP Industria & Artigianato as thunderstorms and temperatures below 8°C beleaguered the riders for the race’s full 199km.

Shortly after 15km, a four-man break, including Primin Lang (IAM Cycling), Jasha Sutterlin (Movistar Team), Michael Schawrzman (Bora-Argon 18) and Ramunas Navardauskas (Cannondale Pro Cycling Team), broke off and eventually established a lead of nearly 7:00. But while the leaders worked well out front, the peloton was shattered by the brutal conditions.

With 50km to go, Team Novo Nordisk riders Charles Planet, Kevin De Mesmaeker and Joonas Henttala joined a group of approximately 40 riders to try and chase down the leaders. But entering the final 4 laps (which included a 7-km climb), the Team Novo Nordisk riders lost contact with the first group and ended up finishing with the second group of 30 riders. Australian rider Simon Clarke (Cannondale) soloed to take the victory. 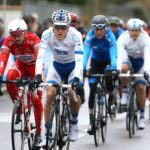