Chicoutimi, Quebec – The final stage of the 2016 GP Saguenay featured a 14-lap circuit through Chicoutimi and kicked off with a high pace under more cold and rainy skies.

Early on, stage 2 winner Bryan Lewis went solo off the front, but was brought back within the last two laps, and Rally Cycling’s Eric Young took the stage win ahead of Ryan Roth (Silber Pro Cycling), who took the overall win. Only 56 riders managed to cross the stage 4 finish line, but Team Novo Nordisk’s Kevin de Mesmaeker (BEL) and Martijn Verschoor (NED) were among them, finishing the stage 42nd and 43rd respectively.

Team Novo Nordisk continues racing in Canada on Wednesday at Tour de Beauce, a multi-day stage race held each June in the Beauce region of Quebec. In 2013, Andrea Peron earned Team Novo Nordisk’s first-ever podium at the race, when he sprinted to 3rd on stage 1. 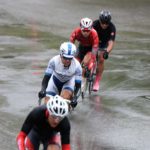 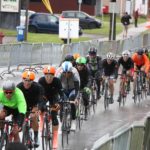