On Thursday, Team Novo Nordisk tackled Stage 1 of the Jayco Herald Sun Tour. The 126.1-kilometer stage began and ended in Healesville and featured two categorized climbs, including a Category 1 climb situated 20 km from the finish. A six-man break built up a maximum a gap of nearly four minutes. The final climb splintered the race and saw teammates Peter Kennaugh (Team Sky) and Chris Froome (Team Sky) attack. The duo reached and passed the breakaway riders; they were never reeled back. Kennaugh went on to take the win and move into the overall leader’s jersey. 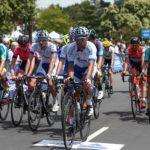 “There was no easy part to today,” Team Novo Nordisk’s Sport Director Pavel Cherkasov said, “In addition to being quite warm. The first hill started to reduce the group. Everyone caught back up but then the pace up the final climb was incredibly fast and shattered the whole peloton.”