On September 15, Team Novo Nordisk Ambassador Becky Furuta joined employees from Novo Nordisk for the 2018 JDRF Ride to Cure in Saratoga Springs, New York. Becky, who was diagnosed with type 1 diabetes at age 28 while pregnant with her second child, led the cyclists in a 100-mile ride through the foothills of the Adirondack Mountains to raise diabetes awareness and support the JDRF mission.

“It was just an amazingly positive, encouraging group of people,” Becky said, “and they took every opportunity to encourage and support other riders along the way, giving pushes or cheering people on or asking if riders needed help. I really couldn’t have asked for a better group of people.”

It’s been two years since I last had the opportunity to participate in a JDRF Ride to Cure event, and walking into the room was like coming home! I got hugs from old friends I have not seen in far too long and had the chance to meet so many new ones from the diabetes community. I was surrounded by all these wonderful people, and there’s always a great energy around the ride itself.

Novo Nordisk had 17 riders from all over the U.S. participating in the event, including a sales representative named Colleen who is living with type 1 diabetes. This was her first ride, and she had just started training in April. We talked a lot about diabetes management and cycling, and what drove her to do this after having diabetes for so many years. When you meet other people living with the condition, there is an instant connection.

The riders from Novo Nordisk had raised over $70,000 for JDRF, making them the top fundraisers for the event. The night before the ride, they were getting an award for their collective contribution. One of the employees from Novo insisted that I go on stage and receive the award on their behalf. I was so honored that they had asked me, especially since they had worked so hard to raise such a significant amount of money for the cause. It really goes to show the extent to which we are all part of the same team. I told them that I never take for granted all the people who work behind the scenes to help me do what I do…and every one of the employees at Novo is an integral part of helping me do that.

Saratoga Springs is beautiful, and we had amazing weather. It was cool in the morning and this mist settled over the mountains. It looked like something out of a postcard. We rode together as a group – all 100 miles. They were incredible. I wasn’t sure what to expect, but the group worked together perfectly on the road. We averaged close to 20 mph over 100 miles with 4600 feet of climbing.

Sometimes, when you’re riding that many miles with people and the heat and the humidity start getting to you, people struggle and you start to feel like it’s a grind. That never happened. All 17 of us just kept talking about how awesome the ride was, how much we enjoyed the company, and how glad we were to be there. It was just an amazingly positive, encouraging group of people, and they took every opportunity to encourage and support other riders along the way, giving pushes or cheering people on or asking if riders needed help. I really couldn’t have asked for a better group of people.

Afterward, we all sat down and celebrated. Other riders kept coming up to our table, thanking us for giving them a pull or for offering some encouragement, and thanking the people from Novo Nordisk for all their work in diabetes care. It was great to see so many different parts of the diabetes community come together in support and camaraderie. 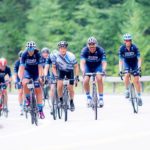