QINGYUAN FOGANG, CHN – Mehdi Benhamouda sprinted to a top 10 finish on Wednesday in stage two at the Tour of China II.

Benhamouda used his teammates in the final kilometers of the 128km road race that began and finished in Qingyuan Fogang to stay fresh and fast for the pack sprint. At 500m to the line a crash in front of him caused the French rider to touch his brakes, but he avoided a fall to finish 8th overall, in the same time as stage winner Anthony Giacoppo of Australia.

Teamwork kept Benhamouda ready for the sprint on a hot day in China, and over nearly three hours of racing on Wednesday that teamwork paid off with Team Novo Nordisk’s first top 10 finish of the 2018 Tour of China, and did much to boost morale ahead of the coming days.

On Thursday the riders will race a quick 92km on an 8.5km circuit, for a total of 11 laps before another expected sprint finish. Friday is a rest day with a transfer by train of 1150km, and the Tour of China II concludes after stages on Saturday and Sunday.

“At the beginning was five laps in the city, and it was really fast and really hot. We caught the breakaway before the finish, and I was ready to sprint. I did the sprint, but at 500m to go there was a crash in front of me, and so I used the brake and lost some position. In the end I was happy with a top 10 finish, so I’m ready for another day and I hope for a better result.” 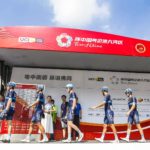 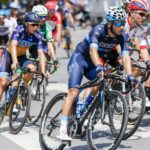