Kigali, Rwanda —The 2019 edition of the Tour du Rwanda concluded this Sunday with Team Novo Nordisk’s David Lozano successfully defending his sixth position in the overall classification on the explosive final stage in Kigali.

In the final stage was a short 61.7kilometres circuit race within Kigali with no less than seven climbs to overcome, including three ascents of the unforgiving “Wall of Kigali”, a 400 metres cobbled climb of 14.5% average gradient.

Astana took the reins early in the day and dictated a demolishing pace that split the peloton right on the first lap. Rodrigo Contreras (Astana) went on the offensive and rode solo upfront for more than half the stage to claim the biggest win of his career so far.

David Lozano rode strongly in the group of favourites and did very well to respond to successive attacks to defend his standing in the overall. Ultimately, the 30-year-old Spaniard crossed the finishing line in 19th position, a result that enabled him to retain the sixth position in the general classification, four minutes and 50 seconds down on Merhawi Kudus (Astana) who was second on the day, securing the overall win of the 11th edition of Tour du Rwanda.

The world’s first all-diabetes pro cycling team completed the 8-stage race with all five riders, one of only four teams to achieve such feat, showing character and true strength in depth. Eight days of stellar teamwork that enabled Lozano to bounce back from a less than ideal start to finish strongly in the six position on the GC. Furthermore, Team Novo Nordisk concluded the race with four Top-10 placings.

“This final stage was a really short one but we had six KOM’s, three of them with pavé with over 14% gradient. It was a really hard course and for those who like numbers it was over 350 watts for 63kg so it was a really hard day. I was with the first group until the last kilometre but I was pretty empty after the effort of yesterday. We have to be happy with our performance, the whole team really committed to me and we did the work we needed to do. I think we finished on a high note and we’re ready for the next races!” 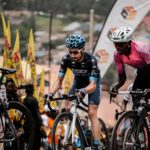