Vejle, Denmark — For the second consecutive day, Team Novo Nordisk was aggressive from the start. Chris Williams was the first rider to attack and when his group was reeled in, James Glasspool immediately jumped on the wheel of the next attacker. This eagerness continued but despite the team’s best efforts, they missed out on the five-rider break that eventually got free on Stage 3 of the Tour of Denmark.

The 180-kilometer stage concluded with three 5.6-km laps on a circuit featuring a 21 percent climb up Kiddesvej. As the escapees reached the climb for the first time, all but one rider was reeled in by a reduced peloton. Despite a very hard crash on the day before, Team Novo Nordisk’s David Lozano made this front group. On the second lap, the chase group began to splinter. By the final lap, attacks flew but the race came down to 20 riders with Michael Valgren (Tinkoff) holding on for the win and moving into the overall race lead. Lozano finished in 31st position, 1:10 behind Valgren.

“I was in the lead group heading into the finishing circuits where I really tried to follow every attack, but I think this meant I expended too much energy on the first two laps,” Lozano said. “By the last climb, I focused on getting up the hill and then giving it my all at the finish. We are racing in the home of our title sponsor so we need to give 100 percent.”

“Even after my crash yesterday, my legs felt good. I know I have the form, but it came down to a brief moment where I hesitated for a second,” Team Novo Nordisk’s Charles Planet said. “In that moment, suddenly I was chasing and couldn’t make it back up to David’s group. I learned a lot from this experience. Just last year, I was in gruppetto on this stage. Today, I was a minute back.”

Team Novo Nordisk, the world’s first all-diabetes pro cycling team, continues racing on Saturday with Stage 4 of the Tour of Denmark. The 19.6-km individual time trial is on an out and back course around Nyborg. 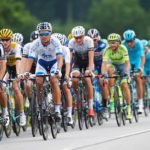