Gioux Stars in Breakaway At Tirreno-Adriatico

Terminillo, Italy — Romain Gioux set out to ride in his first World Tour breakaway on Saturday on the Queen Stage of Tirreno-Adriatico, slipping into a 6-man group at the beginning of the race to build a maximum 10-minute advantage before the final climb at the end of stage four.

Gioux, in his first full year as a professional cyclist, worked up steady cooperation with his fellow escapees as strong headwinds pummelled the group for more than four hours. The 30-year old Frenchman joined Team Novo Nordisk’s pro team last year as a stagiaire, and quickly rose through the ranks to earn a starting spot in 2017.

With the leaders’ teams fully focused on the final 16km climb up to the ski base at Terminillo, Gioux and his breakaway companions were chased down in the final hour and caught with under 20km to go. But not before Gioux waved farewell to his first-ever breakaway in the pro peloton.

Colombian rider Nairo Quintana won the stage and took over the leader’s blue jersey on the snowy mountain outside of Rome, and now leads the race with three stages remaining, including Sunday’s punishing 209km hilly traverse into Fermo. The race ends Tuesday with a short, individual time trial along the Adriatic seacoast.

“It’s important for the team to be in the breakaway, and we went immediately after the start. There were six of us in the group, but the two World Tour riders were clearly the strongest of the bunch. Still, the cooperation was very good, because the whole day was a lot of work and a lot of headwind. The last 16k was fast for the leaders, so when I got to the snow in the final 3k I felt very tired but very happy.”

“Romain is a new rider to the men’s pro team this season, and we are all very proud of him today, and he has every reason to be pleased with his performance in the breakaway. The stage to Terminillo is always a tense and nervous affair, with so many of the big teams keen to control the breakaway and set a strong tempo. He went over and above himself out there on the road, and he made us all very proud of Team Novo Nordisk..” 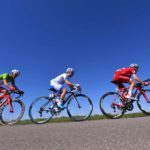 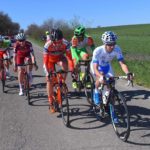