Henttala Shows the Changing Diabetes Jersey in the Tirreno-Adriatico Breakaway

Civitanova, Italy — Joonas Henttala put himself in the breakaway at Tirreno Adriatico on Monday, attacking from the start with seven other riders on the next to last day of the Italian World Tour stage race.

Henttala and his breakaway companions attacked for different reasons, as four riders from the leading group represented competing pairs from two teams in pursuit of valuable points in the mountain jersey competition. The rider from Finland in his fifth season as a professional was seeking the finish line on a rare day when an escape might possibly stay away to the end.

With a maximum advantage of three minutes on a twisting road through the region of Marche after a festive depart from the scenic town of Ascoli Piceno, Henttala and his companions found themselves stopped by the race jury after more than 100km in order to allow the chasing peloton to make up lost time when the bunch was delayed temporarily by a passenger train crossing the race route.

Once back underway the infighting between the two teams in Henttala’s group kept the rivals from full devotion to the breakaway’s chances, and the Team Novo Nordisk rider found himself doing the lion’s share of the work. On the final climb and under attack by the relatively fresh riders, with just under a minute advantage to the bunch, Henttala lost contact with the breakaway as the peloton chased down the leaders.

“We had the GPM jersey leader in our group, and they were going for the climbs. Then 300m before the first KOM the race jury stopped us because the peloton was held up by a train and we needed to stop, too. I ended up paying for that because I was doing most of the work in the breakaway and in the last 30-40k I was pretty empty.”

“The objective today was to be in the breakaway, and see if we had enough time at the end to go for the finish. Joonas did a great job, but in the end he overexerted himself a little bit and was working a little bit too much. He paid a high price on the final climb. Overall it was a really positive day, because if you want to do well you have to put yourself on the line. Joonas tried today and next time he will have his power more accurately spread out.” 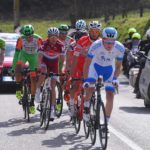 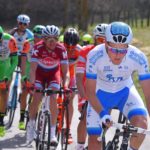