Sprint Day for Benhamouda at Tour of China

DAYE, CHINA – Mehdi Benhamouda took his turn at the fast end of the bike race on Friday, riding as the designated sprinter for Team Novo Nordisk on the circuit in Daye during stage four at the Tour of China II.

On a fast, flat day of racing, with an expected mass sprint at the end, all of the teams in the peloton made some form of tactical representation in the early breakaway, whether off the front at the start or chasing from behind.

After two days of racing for Quentin Valognes, and progress made in the standings and results, confidence at Team Novo Nordisk was high enough to pass the responsibility of leadership on Friday over to young Frenchman Benhamouda, riding in his first full year as a professional on the world’s first all-diabetes professional cycling team.

Each rider on the squad found something to work for during the day, and in the final positions within the ultimate kilometer, Team Novo Nordisk was working up the left side of the road, watching and waiting as other teams began their own attacks.

Marco Benfatto of Italy struck again in Daye, winning the stage four final sprint ahead of countryman and teammate Matteo Malucelli. Siarhei Papok of Belarus found his way back to the podium in third. Benhamouda followed riders up the right side, away from his teammates at the end, finishing 23rd, in the same time as the winner. 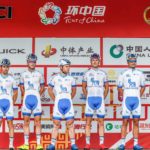 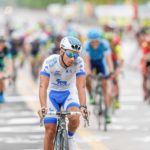 “In the end it all came back to a sprint, because the leader’s jersey team, Androni, worked to bring it together. It was hectic, there was actually a crash with the blue jersey, the sprint leader, in the end and just enough wind to make it uncomfortable.”

“This level of racing has been good to help build a lead out, and now it’s up to the last part of the train to finish the job. Day by day it’s getting better, and the guys did a great job to get into the final 200m, with Quentin as our first guy in fifth – but it’s the wrong decision and a mistake today and we transfer tomorrow by train and try again on Sunday.”

Team Novo Nordisk continues Tour of China II through the end of the week.