Tour d’Azerbaijan Heads Into the Mountains for Stage 2

BAKU, AZERBAIJAN — Thursday’s mountainous stage two at the Tour d’Azerbaijan put the peloton into action against a stiff headwind in the first hour, and only on the first of three categorized climbs did a group of around two dozen riders move into a slight breakaway, with a 30-second advantage until the feedzone at kilometer 84.

Team Novo Nordisk rider Brian Kamstra attempted to cross the no-man’s land between the escapees and the main bunch, but was swept up on a long downhill as the Azerbaijan countryside changed from desert brown to lush and forested greenery.

As the race moved over the final two climbs, the breakaway’s advantage moved out to around 2 minutes, but after heavy crosswinds and a spring thunderstorm with icy rain and hail, the main bunch sat up to let the gap expand. Kirill Pozdnyakov of Azerbaijan won the stage and took over the General Classification leader’s jersey ahead of Ukrainian rider Oleksandr Polivoda and Dennis Van Winden of the Netherlands.

Mehdi Benhamouda started stage two in the leader’s jersey of the Best Young Rider classification, but was caught out on the hills and isolated on the climbs in the heaviest part of the hail and thunderstorm, abandoning the race along with 12 other unlucky riders.

“The stage started hard, with a climb and a headwind, and the speed was very low in the first hour. Then we turned east, into the crosswinds, and the group broke up. Brian tried to get across on the climb, but was stuck in the middle and when the hailstorm came the entire bunch sat up. Our guys will have more opportunities in the next stages.”

“It was very hilly today, and with the crosswinds after the climb it was very hard. Then we had icy rain. That made it worse. Tomorrow it will be hilly, but less than today. I think a bunch sprint of maybe 60 riders will happen, and I plan to be in it.” 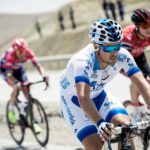