GABALA, AZ — Team Novo Nordisk set out for a day of rolling hills, strong winds and a crash-filled sprint finish on Friday at stage three of the Tour d’Azerbaijan. With five riders in the race, each move on the out-and-back circuit was a calculation in teamwork and effort.

Thousands of local fans came out to the start and watched as the peloton rolled away on a slight descent into a strong tailwind.

A five-rider breakaway formed almost immediately, and quickly stretched its advantage out to nearly six minutes, as the peloton chose to wait until the return point in the village of Sheki and a strong headwind on the way back to Gabala before mounting a chase.

A short, powerful rainstorm halfway through the race soaked the riders before the sun came back out to dry the roads quickly before the finish.

With less than 10km to go the race was all together, but not after a set of nervous crashes at the front and back of the peloton sent lots of riders to the ground, including Umberto Poli and Romain Gioux. Neither were injured and both resumed racing immediately.

In the final 3km only Brian Kamstra survived ahead of even more crashes, finishing in the same time as stage winner Matej Mugerli of Slovenia. Stage one winner Mikhel Raim of Estonia and Ukraine’s Vitaliy Buts finished off the podium.

Saturday the Tour d’Azerbaijan climbs to its highest point at Pirgulu over a relatively short 164km. But the stage won’t be easy, with two categorized climbs and a mountaintop finish.

“The teamwork in the final 25km was important today because the peloton was very nervous and there was a strong headwind. Our guys pulled themselves together to get a rider towards the front for the sprint. The finish was a long, slight incline, more of a power sprint than anything else. Tomorrow we go up into the mountains and it should be a long, tough day in the saddle.”

“Going out today was very fast, because there was a tailwind and it started on a descent. For the finish it was the opposite, and we did good work against the headwind and uphill. When it rained in the middle of the race there was a lot of fighting for position in the peloton to go back to the cars and take jackets and avoid the wind.” 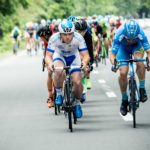 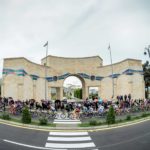