Team Novo Nordisk took on Tour de Filipinas’s longest stage on Friday with the 208-km stage 2 from Lucena to Daet. “Today was by far the hardest race I have ever done,” Team Novo Nordisk veteran rider, Chris Williams, said, “Over 200km of nonstop attacking in ridiculously hot and humid conditions.” 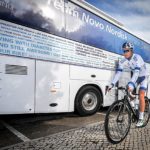 The squad was besieged with challenges early on when, after 10km, neo-pro Brian Kamstra suffered respiratory issues and was forced to withdraw. “Unfortunately I was not able to get over the climbs today,” the Dutch rider said, “and I had to pull out due to sickness. But I’m committed to getting fit again and ready for important upcoming races.”

At 60km, the team’s misfortune continued when Dutch rider Gerd De Keijzer was involved in a crash that took him out of the race. “For me,” De Keijzer said, “this will be a tour to forget. After a perilous stage yesterday, which was cancelled, I had to spend stage 2 in the car after crashing out. On to the next race.”

The remaining Team Novo Nordisk riders struggled to push on, but the hot and challenging stage proved too much for the diminished squad. “Today was full gas and 208km of brutality,” Australian James Glasspool said. “By far one of the hardest days I’ve had on a bike.”

Moving towards the race’s final 10km, six riders broke away from the peloton, and as the group arrived at Talisay, three riders separated from the lead group with Oleg Zemlyakovo (Vino 4ever SKO) sprinting to victory in the last 200m. Scott Ambrose came in with the second group, finishing as Team Novo Nordisk’s best-placed rider at 28th.