Katowice, Poland — Wednesday’s Stage 2 of the Tour de Pologne was another day for the sprinters. The high-paced race saw a five-man break get clear 63 kilometers into the 153-km day. The front group earned a maximum gap of two minutes. As their gap diminished, three escapees attacked with 15km remaining and then Marcel Aregger (IAM Cycling) went off solo. The Swiss rider was reeled in by the peloton inside the final five kilometers, setting the stage for a bunch sprint. Fernando Gaviria (Etixx-Quick Step) took the win and moved into the overall race lead. Team Novo Nordisk’s Javier Megias finished in the front group and currently sits 25 seconds behind Gaviria.

“It was a fast day,” Team Novo Nordisk Senior Vice President of Athletics, Vassili Davidenko said. “After the first 2 hours the average speed was 47km/h. And at the end, we tried our best, but the pace was really fast, with a lot of gaps between the groups. We got split up and had Javier Megias in the front group. What can I say? We’re racing against the best teams in the world, and we’re doing our best. We just need more luck, to work harder and try to stay closer to the front.” 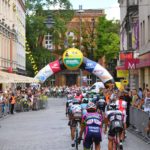 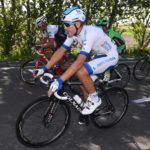 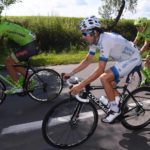