Nowy Sacz, Poland — Stage 3 was the longest stage of this year’s Tour de Pologne at 240 kilometers. Thursday’s stage began under grey skies and on wet roads, which made for a long day in the saddle. The peloton splintered into several groups as strong crosswinds hit the race early into the undulating stage. Eventually, five riders formed the day’s main breakaway. They earned a maximum gap of around five minutes before splintering on the Category two climb to Mystków. With 70 kilometers remaining, a large crash took down two Team Novo Nordisk riders: Martijn Verschoor and David Lozano. Both were able to continue and made it back to the bunch. All remaining escapees were caught on the finishing laps around Nowy Sacz with Niccolo Bonifazio (Trek-Segafredo) taking the win from a bunch sprint. Team Novo Nordisk’s Javier Megias finished in the front group with the same time as Bonifazio.

“It was a rough stage. It was a long stage and we started with strong winds and rain. The roughest part was having the riders involved in the crash. Luckily, they made it back to the group and nothing too serious,” Team Novo Nordisk Senior Vice President of Athletics & GM Vassili Davidenko said. “It is very hard to see your guys down but they are both okay.”

“Javier did an amazing job and he stayed in the front group all the way to the end,” Davidenko said. “The guys did a great job protecting him throughout the day. It was a very long day, but I think it was a good day overall, especially with Javier finishing in the front group. This is our goal, so everything is still going according to plan.”

Team Novo Nordisk continues racing on Friday with Stage 4 of the Tour de Pologne. The 218-km stage serves as the race’s first mountain stage. It begins in Nowy Sacz and features five categorized climbs before three finishing laps around Rzeszówx. 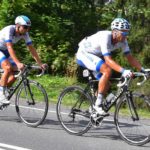 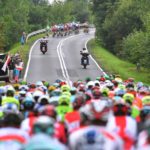