Zakopane, Poland — Stage 5 of the Tour de Pologne’s proved to be one of the most defining and challenging days on the bike for Team Novo Nordisk. The 225-kilometer stage started on wet roads and weather conditions only deteriorated with temperatures dropping and rain increasing.

Saturday’s stage began with a large crash only a few kilometers into the race, which set the stage for the day. Nearly 80 kilometers into the race, a break finally got clear and eventually grew to 18 riders. Due to the weather and the day’s seven categorized climbs, the peloton soon splintered into several groups and dozens of riders abandoned. From the front group, Tim Wellens (Lotto Soudal) set off solo. Alberto Bettiol (Cannondale-Drapac Pro Cycling Team) and Pawel Cieslik (VERVA ActiveJet Pro Cycling Team) joined him but eventually the Belgian set off solo again and held on for over two hours to earn a hard fought win. Team Novo Nordisk’s Javier Megias finished in 40th place, which moved the Spaniard into 43rd overall. Of the 186 riders that began Saturday’s stage, only 100 finished.

“I have ridden my bike my entire life and as a professional now for four season,” Team Novo Nordisk’s Stephen Clancy said. “I have never once experienced a stage even close to as difficult as today’s. While it said seven Category One climbs, that didn’t even include all the other climbs. It was so wet and chaotic from the start. To be honest, today is the kind of day that I hope to forget.” 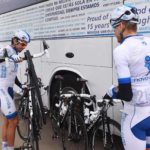