Rwamagana, Rwanda – Team Novo Nordisk earned a podium finish and its best result of the season when Spaniard David Lozano sprinted to a second place finish on Stage 1 of the Tour du Rwanda.

“We are proud to show every person – with and without diabetes – what is possible when you take control of this condition,” Team Novo Nordisk CEO and Co-Founder Phil Southerland said. “Today’s second place finish by David is a milestone achievement for this project and we are proud we did it in Rwanda, which is one of my favorite countries in the world.”

The result marks a career-best for Lozano since joining Team Novo Nordisk. The 29-year-old was diagnosed with type 1 diabetes in 2012 at the peak of his mountain bike career, where he was an 11-time Spanish national champion. After his diagnosis, his team broke his contract. Determined to continue racing as an athlete with type 1 diabetes, Lozano contacted Southerland and joined Team Novo Nordisk later that year.

“It feels amazing to stand on the podium representing Team Novo Nordisk and the entire diabetes community,” Lozano said. “This is the team’s second podium this week, and after a mid-season break, this is an absolutely amazing way to return to racing.”

“David has been a part of this team since the beginning. He has always been one of our leaders and strongest riders,” Southerland said. “This result is going to give him the confidence that he can win, but more importantly, this podium is a success for everyone with diabetes in Rwanda, in Africa, and around the world.

The 104-kilometer stage featured 15 laps around Rwamagana. Half a dozen riders, including Team Novo Nordisk’s Stephen Clancy, controlled the front for the race for the opening circuits, which kept Lozano in good position until the finishing laps. With four laps remaining, Lozano and six riders attacked. In the finish, it came down Lozano and Lagab Azzedine (Groupement Sportif des Petroliers Algerie) with the Algerian-native outsprinting Lozano by a few meters to take the win.

The world’s first all-diabetes pro cycling team continues racing at the eight-day Tour du Rwanda on Monday. Stage 2 is a 120.3 race that begins in Kigali and finishes in Huye.

“All my teammates worked really hard to cover attacks and put me in perfect position for the finish. This result shows how committed and motivated our team is for this race. I attacked on the final climb and earned a gap, but Azzedine passed me with 25 meters to go. I know this is a very difficult race, but I still have seven more chances.” 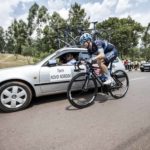 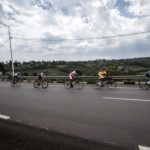