Frederiksberg, Denmark — The five-day PostNord concluded on Sunday with a 199-kilometer race beginning in Faxe and finishing with 10 laps around Frederiksberg. Team Novo Nordisk’s Charles Planet featured in the day’s main breakaway.

Following a standout performance on Stage 3 that saw Planet earn the PostNord Danmark RundtJulemaerkefonden Fighter’s jersey, the Frenchman remained in the running for the king of the mountains jersey, so the team’s primary strategy was to place him into the break.

From the start, nerves were high as other jerseys were still on the line. An initial break escaped, and when several riders bridged, Planet jumped on their wheels and made it up to the break. He earned several points on the climbs and finished the race second overall in the hill competition.

Strong cross and tailwinds affected the race and saw the peloton splinter into echelons before reaching the finishing circuits. Planet’s eight-man group was reeled in as the race reached Frederiksberg and Casper Pedersen (Aqua Blue Sport) attacked and a new five-man break formed.

Pedersen dropped his breakaway companions and set off solo, but the Dane was caught with four kilometers to go. A bunch sprint ensued, and Tim Merlier (Vérandas Willems-Crelan) took the win while teammate Wout Van Aert won the overall race.

The world’s first all-diabetes pro cycling team continues racing at the eight-day Tour du Rwanda on Monday. Stage 2 is a 120.3-km race that begins in Kigali and finishes in Huye.

“I’m happy with my performance and my fight throughout the whole race. I feel I’ve proven that you can never give up. The first two stages weren’t my best, but I remained focus and came out with a podium and a strong race.

I wanted to get in today’s break so much that it definitely added to my nerves at the start. The winds were crazy and riders were fighting hard to make the break. I saw some guys trying to bridge while others riders were closing the road, so I knew I had to go. I made it and I was really happy to be up there again.

Then I focused on fighting for hill points and also to be the day’s most combative rider again, but unfortunately, the wind was too strong and the peloton caught us before the finishing laps. “ 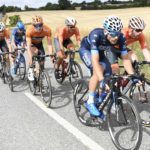 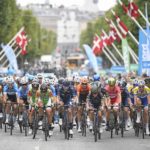