Stagiaire Shows Potential at Tour of China I Opener

Race: Tour of China I, stage 1

Tianjin, China — Team Novo Nordisk stagiaire Quentin Valognes showed his potential on Friday’s opening stage of the 2016 Tour of China I, when he sprinted to a solid 16th place.

“We took a risky tactic,” Team Novo Nordisk Sport Director Pavel Cherkasov said, “and tried to put everything towards getting Andrea Peron in position for the final sprint. The team did a great job! Corentin [Cherhal] and Gerd [de Keijzer], who were chasing on the last lap, started the train to the last three guys on the final. But it was very chaotic sprint. Mehdi Benhamouda tried to be on Andrea’s wheel to protect him, and Quentin was supposed to be one of the last guys for Andrea’s sprint. But on the last kilometer Andrea and Mehdi got covered and weren’t able to sprint, so Quentin stepped up.”

The 20 year-old Valognes dug in for the sprint and finished 16th, with the same time as stage winner Marco Benfatto (Androni Giocattoli – Sidermec).

“The whole team worked well to help each other,”Valognes said. “The atmosphere at the race is very positive.Our goal was to help Andrea today, but it was difficult because this style of race is very frenetic. He is the veteran of this squad, and he’s doing a great to help us young riders out.” 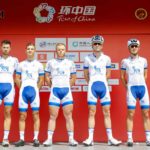 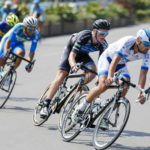