Race: Tour of China I, stage 3

Banan, China — Following a transfer day on Sunday, the 2016 Tour of China I resumed racing in Banan with Monday’s stage 3.

“At just over 114km,” Team Novo Nordisk Sport Director Pavel Cherkasov said, “the stage was relatively short. But it featured enough climbing to be able to create a lot of splits in the group.”

Once again, Androni Giocattoli – Sidermec controlled the stage, while the young Team Novo Nordisk squad battled to maintain contact on the climbs. “Unfortunately Mehdi had been struggling with the knee pain from the crash a week ago and had to DNF,” Cherkasov said. “But the rest of our guys were able to fight, and three of them finished with a group of about 60 riders.”

Team Novo Nordisk, the world’s first all-diabetes pro cycling team, continues racing tomorrow with stage 4 of Tour of China I, which will feature 157.4km of mountain racing from Bazhong to Pingchang. 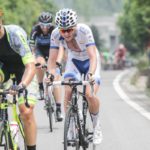