Peron Fights at Tour of China I

Race: Tour of China I, stage 4

Pingchang, China — Team Novo Nordisk rider Andrea Peron (ITA) fought hard to stay among the leaders on Tuesday’s hilly stage 4 of the Tour of China I.

“Today was the hardest stage so far,” the 27-year-old Peron said. “The breakaway went early– before the first climb– so the peloton we went easy until we reached the first ascent. After that, the pace was high, and we were constantly chasing the break of 11 riders.”

The group split on the race’s first categorized climb, with Peron emerging in a front group of approximately 60 riders. But as the race advanced, Team Novo Nordisk rider Corentin Cherhal was forced to abandon due to stomach issues. However, Sport Director Pavel Cherkasov Cherkasov is confident the young French rider can recover before next week’s Tour of China II.

“I saw our stagiaire Quentin Valognes among a group of riders,” Cherkasov also said. “He was fighting hard and eventually able to reach a larger group which included Gerd de Keijzer. And both were able to finish together. Andrea always stuck with the first bunch for the entire race. He rode very well, and even tried to attack on the last few kilometers.”

“The breakaway was getting smaller,” Peron said, “and in the end there were only two guys remaining. There was a slight uphill inside the final three kilometers, and attack after attack. I took a chance to go for it, and try to take the podium. But on the last 700m we were only 3 riders, and the group was coming back. Then with 500m to go, I decided to attack but I was caught with 200m to go. I gave all but it didn’t work. We will try again tomorrow!” 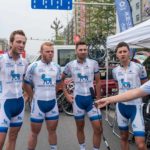