Xinzhou, China – Team Novo Nordisk’s Andrea Peron earned his second straight top 10 finish at the Tour of China when he sprinted to ninth on Stage 6.

“It was a confusing and hectic day because of the short stage and the overall still being on the line,” Peron said. “There were attacks all day and I tried a few times to get away. Nothing ever stuck. With the last five kilometers, I switched over to focusing on the final sprint. It feels good to go top ten two stages in a row.”

At 99.6-kilometers, Friday’s race was short but full of action. Only four seconds separated the top podium spots and the top 10 riders overall were constantly attacking. Androni Giocattoli-Sidermec, who began the day in the overall race lead, kept the race well controlled and the day ended in a bunch sprint. Marco Benfatto (Androni Giocattoli-Sidermac) sprinted to the win with teammate Raffaello Bonusi taking the overall.

Team Novo Nordisk, the world’s first all-diabetes pro cycling team, resumes racing on Sunday at the Tour of China II. The six-day race kicks off with a 3.3-km prologue at the Hubei Olympic Center. 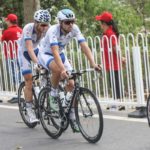 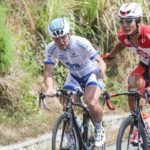