Stephen Clancy escaped into a 7-rider breakaway after a frantic first hour of racing, and stayed off the front until 200m from the finish in Changde, a city of 5-million people in northwestern Hunan Province. Changde’s tourist attractions include Liuye Lake, where the Asian Rowing Championships were held in 2016.

Stage three finished in a mass sprint, with Valognes moving further up in the finishing ranks from his numbers on Wednesday, and demonstrating progress in solving the complicated mixture of immediate reaction time and careful anticipation of the future required in pro cycling sprints.

Friday’s fourth stage will also likely end in a mass sprint, and Team Novo Nordisk riders will put stage three’s lessons to use and work more to progress further.

Marco Benfatto of Italy won the mass sprint in Changde, ahead of Aussie Scott Sunderland and Latvian Maris Bogdanovics. Valognes finished 17th in the same time, his second top 20 finish in the 2017 Asia Tour.

“Definitely faster today, 45-50km an hour and a mass sprint at the end. Clancy got in the breakaway and that kept us fresh for Quentin at the end. Tomorrow is another sprint for us.”

“Seven riders in a breakaway get caught 200m from the finish, and Clancy is in it. A good move for him. Everybody else was working like a train for Quentin in the sprint, and it’s a special mention for Gerd today because he is always 100 per cent and always pulling first.”

Team Novo Nordisk continues Tour of China II through the end of the week. 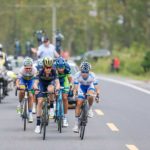 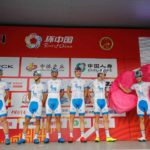