With temperatures reaching 104ºC/104ºF, stage 5 of Tour of Hainan was a scorching 184.9km from Danzhou to Changjiang. After the first categorized climb, a seven-man break featuring Williams, quickly pulled away and eventually established a gap of over 3:00.

“Well today was insanely hot,” Williams said. “I was drinking a bottle every fifteen minutes! The break originally had seven riders, but because the race has so far been decided on bonus seconds, many sat up and went back to the peloton after the first bonus sprint. So then there was four of us left, and we continued to the second sprint at the 130km mark, where I took second. After that, the heat and crosswinds had taken its toll, so I decided to wait for the peloton.”

Once the breakaway had fallen apart, the Team Novo Nordisk squad began preparing for the sprint, but as the race approached its final kilometers, a hot and fatigued peloton were hit with crashes, one claiming Team Novo Nordisk riders Joonas Henttala and James Glasspool. Fortunately, Henttala was able to resume racing, but Glasspool, while able to finish the stage, was forced to abandon the race due to a banged up leg.

With 15km to go, another crash split the peloton, but Williams and teammates Quentin Valognes and Brian Kamtra emerged unscathed with the front group. Team Novo Nordisk sprinter Andrea Peron came back with 7km to go, with Henttala still chasing. At 2km to go, the group was hit with yet another crash, but Valognes and Peron managed to get through to the final sprint. 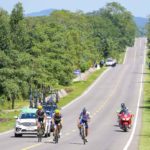 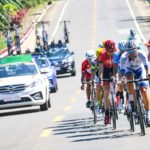