Qiongzhong, China —At 165.8 kilometers, Saturday’s stage 8 of the Tour of Hainan wasn’t the longest of the 9-day race, but with four categorized climbs it proved to be one of the most challenging.

The peloton set a high pace in the opening kilometers, discouraging any breakaway attempts, and the bunch held tightly together for first 50km. But after 55km of racing, a group of nine riders managed to break free and eventually built a maximum gap of 3:50.

The peloton shattered on the race’s penultimate climb (featuring an average gradient of 8.1%), and Team Novo Nordisk riders Brian Kamstra and Joonas Henttala emerged with the chase group.

At 30km to go, the break had been reeled in, and the lead group of 22 riders prepared for the sprint. Alexey Lutsenko (Astana Pro Team) won the day and retains the yellow jersey. Kamstra and Henttala finished best for Team Novo Nordisk at 39th and 40th respectively. 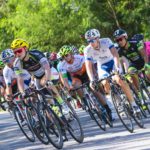 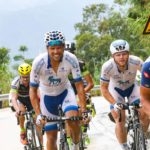