Qiongzhong, China —Sunday’s final stage of the Tour of Hainan got off to a complicated start for Team Novo Nordisk.

Challenging crosswinds forced the race to be delayed and shortened, and Team Novo Nordisk rider Chris Williams was unable to take the start line due to illness, leaving Team Novo Nordisk with a three-man squad comprised of riders Joonas Henttala, Brian Kamstra and stagiaire Quentin Valognes.

Soon after the race’s opening kilometers, a group of three riders pulled away, and the Pro Tour teams set a high speed in peloton to ensure the break never got further up the road than 1:30; but the reduced Team Novo Nordisk squad was able to its own with the bunch.

“Today was a bit confusing,” said Valognes, “because of the changes to race. But then again, it was the same for everybody!”

As the race approached its final 40km, the riders were hit with a crosswind that split the peloton, but the Team Novo Nordisk riders were able to make the front group. At 5km to go, the break was finally reeled in, and Henttala and Kamstra went to work, helping Valognes to get into position for the sprint.

“We were just three riders in the sprint,” Valognes said, “but Brian and Joonas put me in the perfect position with 3km to go. But unfortunately I couldn’t find a way to get to the front and sprint with the first guys. I’m a bit disappointed because I feel good and, being from Normandy, this was definitely my kind of weather: a lot of wind with some rain. It’s good to have motivating teammates, even in this 9th and last stage.”

“I am happy about this race,” said the 20 year-old Valognes. “I had no idea how I would manage in this kind of race. I was thinking that after nine grueling days I’d be destroyed, but I actually feel better now on the first day. It was also a tremendous experience to race alongside the Pro Tour teams and learn how they let a breakaway go and then bring them back, and learn how they plan for the final sprint. Everyone is getting tired, but we have a very good staff who keeps us smiling, so it’s all good!” 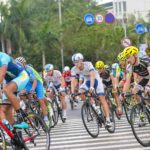 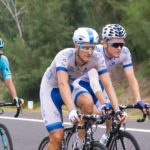