Moon Bay Hotel, China — Strong winds and a rainy finish made for a challenging stage 2 at the Tour of Taihu Lake, where Team Novo Nordisk stagiaire Quentin Valognes came in just outside of the top 10 in 14th position.

The 139-kilometer stage saw a seven-man breakaway escape early into the race, without any Team Novo Nordisk riders making the group. Back in the peloton, the Team Novo Nordisk squad rode in support of Valognes and Martijn Verschoor in hopes of the race coming down to a bunch sprint.

With 5km remaining, the last of the break had been reeled in, and the riders prepared for the sprint. But in the last 300m Valognes and Verschoor were boxed in.

“There was strong teamwork in the final meters of the race,” Valognes said. “I tried to follow Martijn, but with rain I decided to go left (Martijn went right), but heading to the sprint, we were both more or less blocked. It’s frustrating because, coming Normandy, I love the windy and rainy weather so much, and my teammate worked very hard for us.“

Jakub Mareczko (Wilier – Southeast) won the sprint and the stage, with Valognes and Verschoor finishing at 14th and 19th respectively. 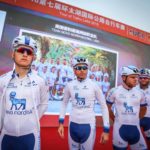 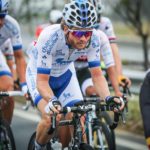 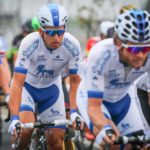