Laigueglia, Italy – The punchy and difficult hills of Italy’s Ligurian seacoast set the scene for Team Novo Nordisk’s continental European race debut on Sunday, lining up the world’s first all-diabetes cycling team against some of the top Italian and international riders for a 150km loop with three hard climbs and tricky descents followed by three 10-km loops of a narrow ascending road with a quick downhill to the sea before a flat, fast finish.

After 25km of constant attacking by the peloton, including Brian Kamstra and Charles Planet, a five-man breakaway formed on the first climb of the day, followed by a light rain that made the tight curving roads slippery. With a 6-minute advantage the breakaway was controlled back in the peloton before the second descent, when even slippier roads favored riders at the front and caused large gaps to open up in the chase.

All groups were reunited at the finishing circuit, with Planet and Henttala inside the leading groups on the first of three climbs to Colla Micheri. Italian national team rider Fabio Felline won the day ahead of France’s Romain Hardy and Italy’s Mauro Finetto.

“Position was key today. We raced pretty hard on the first 2-3k of the climb, then five guys got away and we let them go. But the slippery downhills and the crashes made it really hectic, and there were a lot of splits in the group. It was a really intense race chasing the splits to get the group back together again. The level here in Italy is high, and there were some big teams sitting at the front and controlling this race.”

“We raced in Mallorca and then Dubai, where it’s flat, and to come good into Laigueglia you need some big stage races and climbs for preparation. It’s only the second race of the season in Italy, but it’s always really difficult here because the descents are fast and narrow and slippery. Joonas went above himself today and showed good progress, and we can see where progress is possible with the rest of the program.” 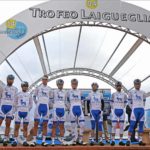