CASPE, SPAIN — Summer racing has begun for Team Novo Nordisk as the world’s only all-diabetes pro cycling team took to the start of the three-day Vuelta Aragon on Friday, under sunny skies across the rolling hills of Spain.

Seven riders from Team Novo Nordisk set out in a peloton of 135 from historic Teruel, known for its Moorish architecture and outdoor recreation tourism, and quickly found themselves in a hard race on a hot day in early May. Temperatures reached 28C/82F with a light tailwind for most of the 180km.

With mountains coming up on Sunday it was a race for the sprinters on Friday, and for the first hour the average speed hovered around 50km until a four-man breakaway pushed out to a maximum advantage of almost three minutes.

But the after the feed zone the chase was on, and in the final 10km the escapees were captured on the run in to the finish in Caspe. Team Novo Nordisk sprinter Andrea Peron finished just one second behind the winner with coordinated team assistance on the tricky streets of Caspe, famous for its proximity to the nearby Mequinenza Reservoir, a repository for the Ebro River known locally as the Aragon Sea.

“Getting back from Australia was important for me, and I’ve done lots of training to build back up to this race. The composition of this peloton is a strange one, it’s a lot of pro continental and continental teams with just Movistar from the World Tour. So it’s really fidgety and the first thirty minutes were just crazy fast. We got Andrea up to the front at the end in a city-center finish, and tomorrow we’ll see what happens next.” 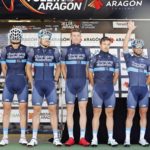 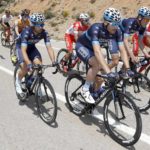