CERLER, SPAIN — The final stage at the 2018 Vuelta Aragon took the peloton into the mountains on Sunday, and Team Novo Nordisk climbed with the best in a race not run since 2005.

Three climbs marked the short stage, with Team Novo Nordisk pushing ahead as the race moved towards a mountaintop finish in Cerler. Lozano and his teammates worked up the winding roads against a strong and cold headwind, finishing the Vuelta Aragon strong ahead of planned races in Estonia and Poland later in the month.

“The race went fast from the start, and it was a big chase on the descent to get back to the peloton. My maximum speed was around 60-65mph, maybe 105-110km per hour on the way back down. In times like that you just pedal really, really fast and make yourself as aerodynamic as possible.”

Team Novo Nordisk, the world first all-diabetes pro cycling team, continues racing on May 25 at the two-day Tour of Estonia. 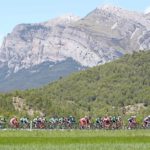 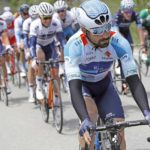 Lozano Climbs in the Breakaway at Vuelta Aragon