Lozano Climbs in the Breakaway at Vuelta Aragon

ZARAGOZA, SPAIN — Wind and rain threatened the peloton all day on Saturday, making stage 2 at the Vuelta Aragon a nervous and fast dash from the foothills of the Pyrenees Mountains to a shining city across the Ebro River.

David Lozano found himself in the breakaway in the opening minutes of the stage, and, with a major mountain stage coming on Sunday, the Spanish rider chose to fight for the Climber’s Jersey points on hand in a four-man group that never gained more than two minutes on the peloton.

After two hours of racing, the four dwindled to three, and Lozano found himself the strongest climber in the breakaway, sprinting past his French and Basque companions to take all of the day’s KOM points before the peloton caught them with less than 10km to the finish.

Sunshine prevailed for the sprint, with a small split in the peloton on the many rotundas that led to the polished aluminum and glass architecture of Zaragoza’s World Expo site on the banks of the Ebro. Neither rain nor wind would spoil a perfect Saturday.

“I was not meant to go in the breakaway, because I needed to save my legs a little bit for tomorrow. But I found myself on the front in the climb, and when I attacked I made the break. Once you are there you can not stop.” 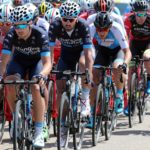 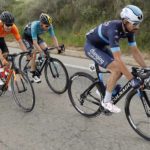