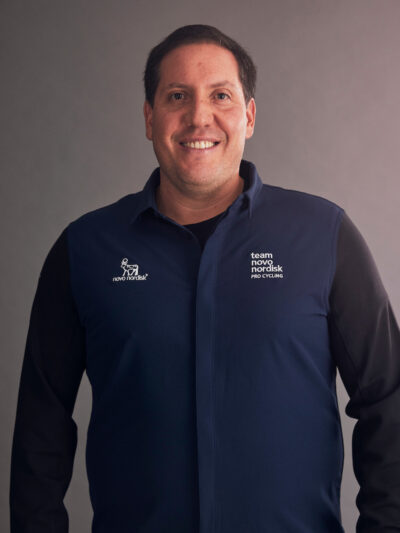 Born and raised in Mexico City, Mexico, Team Novo Nordisk’s Team Doctor Rafael Castol has been instrumental in designing and implementing the team’s medical program. Based on his experience during the 2013 season with Team Novo Nordisk, he co-authored “Lessons from the Professionals: Diabetes and Pro Cycling,” a peer-reviewed article published in healthcare journal “Practical Diabetes.”

Dr. Castol graduated in Medicine and Surgery from Anahuac University, Mexico City before completing his medical internship at the Traumatology Center of the Álava University Hospital in Vitoria, Spain. Shortly after, Dr. Castol went on to gain a postgraduate degree in Sports Medicine and Exercise Science from The University of Sydney, Australia, focusing in high performance endurance sports. He currently specializes in elite athlete development, sports injuries and traumatology, sports nutrition and pharmacology, elite athlete testing and training, exercise metabolism and physiology, monitoring elite athlete performance and recovery, hormonal response to exercise and sports biomechanics, among other sports-related areas.

During his postgrad medical training in Australia, Dr. Castol gained professional experience working in high performance sport with professional and olympic athletes in the Australian Institute of Sport (AIS), the New South Wales Institute of Sport (NSWIS), the Sydney Academy of Sport (SAS) and the Sydney University Sports Medicine Centre. Upon completion of these studies, Dr. Castol decided to follow his passion for sports medicine and combine his work between a hospital setting and working in a professional sport environment engaging directly in the field with athletes who are actively training and racing in major competitions. At this time, he had the opportunity to be part of a new pro cycling team project that would be first ever pro cycling team composed solely of riders living with of type 1 diabetes and was immediately interested in the project. Dr. Castol signed on to be part of Team Novo Nordisk as Medical Director when the team launched in December 2012. He directed the medical team for four years and was able to build the foundations of the team’s medical program and put together a medical team that successfully work together to establish the team’s guidelines and protocols for optimal glucose control, monitoring and management of type 1 diabetes in our riders.

After four years of traveling 180+ days a year with the team to races all over the world, and building a comprehensive medical team capable of monitoring and ensuring that type 1 diabetes was no longer a factor limiting our athletes to perform optimally at the highest level of sport, Dr. Castol was able to temporarily step away from the program to continue pursuing new professional goals in the field of sports traumatology, emergency medicine, and musculoskeletal interventional ultrasound while also working at the Figueres-Costa Brava Hospital in Girona and at his private sports medicine practice.

Dr. Castol is a member of the American College of Physicians, American College of Sports Medicine, a certified member of the Spanish Emergency Medicine Society, the Spanish Society of Sports Medicine, the Spanish Society of Musculoskeletal Radiology and Ultrasound and a research associate at Anahuac University Institute of Public Health. He has also been the Medical Doctor for the Ironman Triathlon Mexico for many years, Sports Doctor and Performance Consultant for KTM Group/Red Bull Rally Racing Team and for Mexico’s Triathlon Olympic Team as well as for various professional and Olympic endurance athletes.

A passionate athlete and cyclist Dr. Castol has been riding bikes for more than 20 years. He has also raced triathlons competitively in his age group for 15 years and attended numerous world championships. In his free time, he still enjoys racing triathlons, mountain biking, and mountaineering.

Get to know Rafael Castol

What is your idea of perfect happiness?

Being able to share moments of my life with the ones I love.

What is your current state of mind?

Deep in the alpine forest with big mountains.

What do you most value in your friends?

What is it that you most dislike?

What excites you creatively, spiritually or emotionally?

What sound or noise do you love?

What profession other than your own would you like to attempt?

← Charlotte Hayes, MMSC, MS, RDN, CDCES, ACSM CEP
Sam Scott →
back to staff
We use cookies on our website to give you the most relevant experience by remembering your preferences and repeat visits. By clicking “Accept”, you consent to the use of ALL the cookies.
Cookie settingsACCEPT
Manage consent