On July 29, 13-year-old Manato Ohara set out on an epic, 5-day journey to ride 900km from Tokyo to Hiroshima “to encourage children with diabetes and to improve his diabetes management skills.”

The ride was aptly named ‘Manato’s Challenge’, and having been diagnosed with diabetes only three years ago at age 10, it would prove to be the biggest challenge so far in Manato’s life with diabetes.

Manato started cycling in early 2014, and a few months later, he was diagnosed with type 1 diabetes. Later that year, he saw Team Novo Nordisk racing at Japan Cup Road Race and started chasing a new dream: to one day riding with the Pro Team.

Now, Manato rides every day with his local cycling club, building up to over 4 straight hours on the bike with strength training 2 times a week. But riding 900km over mountain ranges, islands and other obstacles would be a monumental challenge for a fully trained adult, let alone for a 13-year-old boy living with the challenges of diabetes.

Manato set out undaunted, however, excited to see new places, try new foods and to inspire others affected by diabetes.

The Road to Hiroshima

Early in the morning of July 29, Manato and his father, Hiroaki, embarked on their journey from Zushi (Kanagawa). Hiroaki, who four years ago rode from Tokyo to Hiroshima in 4 days, led the way.

“My previous journey was along major roads, with lots of cars and trucks on the way,” Hiroaki said. “This time, we plan to take more local roads, with less traffic. I’ve mapped out the course, and I expect our biggest challenge will be climbing Hakone Mountain and the most exciting will be riding over Shimanami-Kaido bridges.”

From Zushi, the father and son team rode to Atsumi peninsula (Aichi), where they took the ferry to Mie. From there, they rode to Wakayama and took another ferry to Tokushima. For the final two days and 300km, Team Novo Nordisk Ambassador Justin Morris joined the duo.

“I had the honor of joining Manato and his father for the final two days of this epic expedition. Having met Manato on one previous occasion, I knew this was a young man with an incredible passion for his sport and for life in general.

On the fourth day of his journey, this passion and zest for life was becoming more and more evident. I witnessed how Manato dealt with challenges such as traffic, heat, exhaustion, suffering on the bike, mountains and, of course, diabetes management.

On our two days of riding together, the temperature never went below 30ºC/86ºF, and the humidity was always stifling. This can throw a spanner in the works of managing blood sugar levels, but being able to witness how Manato dealt with these challenges was truly inspirational.

He never once complained or showed signs of giving up. Manato took every challenge in stride and just kept going, getting on with the challenge at hand.

The final day was perhaps the most demanding of the trip, with close to 180km and two mountain passes into Hiroshima. The heat this day was absolutely roasting, and many adult cyclists would have thrown in the towel and hopped in the air-conditioned van that was following.

By the second mountain pass, the end was within striking distance and excitement was at fever pitch. We were riding a good tempo up to the summit of the long climb. I started to pick up the pace, and then BOOM- the Manato flash came past me, taking the king of the mountain! A future KOM jersey winner for sure.

Manato showed tremendous grit, determination, perseverance and strength on this challenge. But what adds so much more to this achievement is the manner in which young Manato has conducted himself. He has always maintained a calm, down-to-earth demeanor and was very modest, appreciative and curious, even when the situation was stressful.“

On August 2, the team made it to the Shimanami-Kaido bridges, and as they crossed the finish line in Hiroshima’s Peace Memorial, they were cheered on by friends, family and others who had been inspired by Manato’s achievement.

“Witnessing this accomplishment was a true inspiration for me and for all who met Manato this week,” Justin Morris said.

”Manato’s talent on the bike and his attitude to life will serve him very well, and I believe he can pursue his dream of pro cycling or anything in life for that matter.

I’ve been in cycling for close to 20 years, and I have seen a lot of amazing feats in this sport. But seeing what this young, 13-year-old man with diabetes achieved was a true marvel and one of the most amazing feats I have witnessed.

What Manato has achieved is a real embodiment of the Team Novo Nordisk mission and our values. Manato inspired, educated and empowered so many people affected by on his heroic journey.” 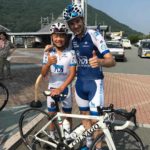