ZAKOPANE, POLAND – David Lozano dug in and fought to the finish of a hilly stage six at the Tour de Pologne on Thursday, passing most of the peloton and at least one pony on the road.

Andrea Peron’s hand injury worsened overnight, and the Italian rider was forced to abandon the race as he was unable to grasp his handlebars at Thursday’s start in Wieliczka (pronounced Veel-itch-ka) a Polish town famous for its deep and productive salt mines.

A pet pony broke its leash as the peloton passed through the village of Czarnym Dunajcu (pronounced Char-neem Dune-ah-chew). The small animal ran inside the peloton for several hundred meters before being guided off the course by one of the cyclists.

Martijn Verschoor withdrew from competition soon after the race entered the steep hill section around southern Poland’s mountain resort complex, while at the front of the race the teams vying for General Classification quickly whittled the front peloton down to around 50 riders for one large and two smaller laps before the finish in Zakopane (pronounced Zako-pana).

With less than 20km to go, Lozano was among the world’s best cyclists at the end of a hot, hard four hours of racing. The Spaniard detached and rode his top pace with a group of climbers in front of tens of thousands of cycling fans.

Australian rider Jack Haig won ahead of Wout Poels of the Netherlands and Bob Jungels of Luxembourg.

“Bahrain made a good, hard selection when we got to the circuits, and it was just me and Javi. I’m really happy because last year I couldn’t follow on this stage, but today I was up there until the last climb. Tomorrow is going to be a short stage with a lot of fireworks. It will be important to do a good warm up and start in a good position.”

“Peron could not hold the handlebar today, so it’s sad he has to abandon. In the circuits today in Zakopane David was at the front until the final climb, and came in with a top group of riders. Tomorrow will be intense and hard, but we are going strong.” 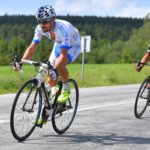 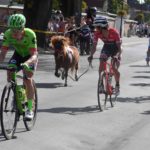