The duo worked well together, eventually establishing a lead of 4:10, and Schillinger took sprint and mountain points on the first two of the day’s three climbs. Clarke fell behind on the second climb, however, leaving Schillinger with a solo advantage. But with 25km to go, as the race approach its final climb, a determined group of chasers, which included several of the race’s GC contenders, started to chase him down.

Once Schillinger was caught, the attacks began, and the riders positioned themselves for the sprint finish, where Luca Wackermann (NASR-Dubai) edged out Nikita Stalnov (Astana City) and Rinaldo Nocentini (Sporting Tavira) for the win.

David Lozano (ESP) finished best for Team Novo Nordisk at 39th, 11:19 behind Wackermann. “Lozano tried to attack on the first climb,” Team Novo Nordisk Sport Director Massimo Podenzana said, “but he was unable to pull ahead and settled into the second group of approximately 50 riders. Tomorrow is the last stage, and we will go for the breakaway.” 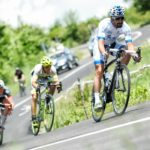 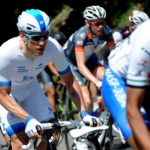