Baku, Azerbaidjan –  The final stage of the 2016 Tour d’Azerbaïdjan got off to another nervous start, with challenging crosswinds and several teams fighting to make the breakaway. Team Novo Nordisk began the race with a diminished squad, with James Glasspool (AUS) unable to start due to a rib injury suffered earlier in the week, and struggled to put a rider in the break. So, when after 10km, three riders, including Gil Martinez (Wilier Triestine-Southeast), Rubio Arribas (NASR-Dubai) and Jason Lowndes (Drapac Pro Cycling), pulled away, Team Novo Nordisk’s David Lozano (ESP) and Brian Kamstra (NED) hung tight with the first group.

The leaders eventually established a maximum advantage of 3:00, but the chasers reeled them in as they approached the race’s final circuits in the Old City of Baku. Lozano and Kamstra remained with the lead group until the last circuit, but as the riders positioned themselves for a fast, all-out finale, Kamstra was held up behind a crash. Lozano went hard in a dazzling bunch sprint and was able to arrive in 20th place, 0:02 behind stage winner Michael Schwarzmann (Bora – Argon 18). Markus Eibegger (Team Felbermayr Simplon Wels) went on to secure the overall Tour d’Azerbaidjan title.

“Today was another tense stage, with the crosswinds” Lozano said. “but the guys helped me survive. At the end, with the hard circuits, my legs felt good and I followed the critical attacks. In the end, maybe I didn’t take enough risk for a better placement, but I did my best.”

Team Novo Nordisk continues racing at the Amgen Tour of California on May 15. 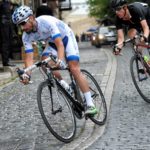