Mont-Mégantic, Canada — Thursday’s Tour de Beauce queen stage lived up to its name with sharp hills, crosswinds and a steep, 5-km climb to the finish.

A group of 13 riders pulled away approximately 50km into the race, and after a few attempts, Team Novo Nordisk’s Kevin de Mesmaeker (BEL) was able to bridge a small gap and join the leaders in the breakaway. But the chasing peloton applied constant pressure throughout, and the break was unable to gain an advantage of more than 1:30.

As the the race entered its final circuits, the breakaway started to come apart and lost riders on every lap. de Mesmaeker clung to the remaining group of eight riders until the final lap, but lost contact before the climb and and dropped back with the chasing peloton.

As the riders started to ascend Mont-Mégantic, featuring its average gradient of 15%, the breakaway was absorbed into an elite group of less than 25 riders, which included de Mesmaeker and teammate Martijn Verschoor (NEL). “Kevin and Martijn worked hard to stay with the first group,” Team Novo Nordisk Sport Director Pavel Cherkasov said, “then the climb blew everything apart.” 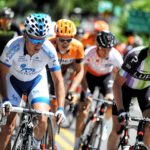 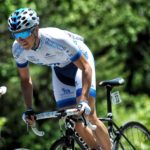