St-Georges, Canada — On Sunday, Team Novo Nordisk wrapped the 2016 edition of the Tour de Beauce with a 122.4-km circuit race through St-Georges.

A breakaway of six riders ignited most of the stage, working up a gap of nearly 2:00 minutes. But the peloton was determined to reel in the leaders, and maintained a high speed in pursuit, which dropped several riders with each passing lap. “Everyone new that the tactics of this stage will be simple,” Team Novo Nordisk Sport Director Pavel Cherkasov said, “try to stay with diminishing group.”

“It was a very hard stage,” Henttala said. “The pace was high from the gun, and it was like elimination race on a hilly city circuit. On the few few stages, I perhaps didn’t feel my best, but today I found my legs. I just missed a split in the final, so I’m slightly disappointed, since I thought I’d have a result in me today.”

Team Novo Nordisk, the world’s first all-diabetes pro cycling team, reconvenes next week for a mid-season training camp in Italy, where they will prepare to for their debut at a World Tour stage race at the prestigious Tour de Pologne. 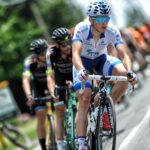