Planet Hangs on to Top 10 at Tour de Korea

The stage got off in to an animated start in Gunsan, with several teams going on the attack. After 10km, a group of 25 riders managed to pull away to form the main breakaway, including Planet, Andrea Peron (ITA), David Lozano (ESP) and Corentin Cherhal (FRA) for Team Novo Nordisk. The group eventually established a gap over 4:00, but were not able to work well together and the peloton started to chip away at the lead.

As the race approached its final 10km, the leaders clung to a 30-second gap, with peloton in site. Both the peloton and the break prepared for the final, and at 2km the bunch was back together. Karol Domaglski (ONE Pro Cycling) sprinted to the victory, with Peron finishing best for Team Novo Nordisk at 23rd, the same time as Domaglski.

“The guys continue to race well,” Team Novo Nordisk Sport Director Massimo Podenzana said. “All four riders worked hard in the breakaway, but unfortunately there was not much agreement among the group and they couldn’t stay away. We’re performing well so far, we just lack a little bit of luck.” 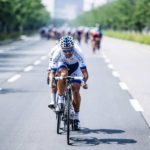 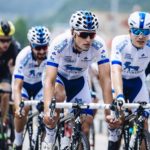